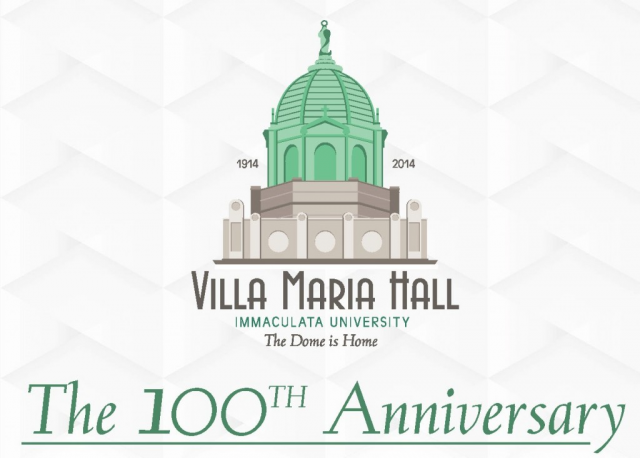 Immaculata University invites the community to help celebrate the 100th Anniversary of its Villa Maria Hall on Sunday, Sept. 14.

Mass will be celebrated at 11 a.m. in Nazareth Chapel, followed by group photo outside Villa Maria Hall, and unveiling of a unique 100th anniversary cake to be shared. In case of rain, the cake will be offered in the Rotunda.

Villa Maria Hall with its landmark dome was the home of Villa Maria Academy from 1914 through 1920. It then became the home of the first Catholic college for women in the Philadelphia area. Visitors will be able to tour Villa Maria Hall, and the dining hall will be open for dining from 11:30 a.m. until 7 p.m.  The group photo will be featured in the next issue of Immaculata Magazine and on the university website.

There is more information on the university web site here. Those who plan to attend should rsvp here.

Immaculata also recently announced its championship Mighty Macs women’s basketball team has been recognized by three prestigious organizations for their contributions to the game.  The team will be inducted into the 2015 Women’s Basketball Hall of Fame in Knoxville, Tenn., and recognized for their contributions to the game in a display at the Hall titled “Trailblazers of the Game.”

The 2015 induction ceremony will take place June 13, 2015.  The Mighty Macs are also being inducted this year into the Naismith Memorial Basketball Hall of Fame and the Philadelphia Sports Hall of Fame.