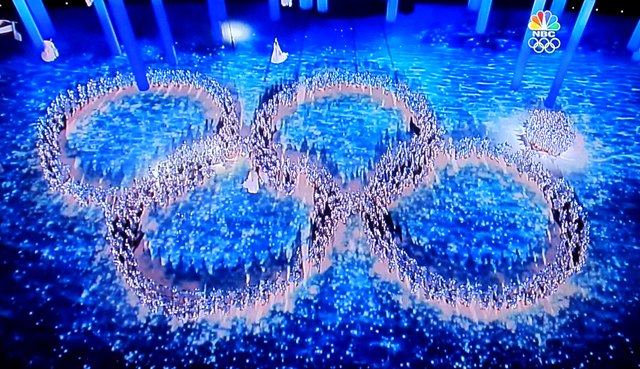 As the flame was extinguished at these Winter Olympic Games last night, I was one of the closet saps who shared a tear with Olympic bear mascot.

I buy the Olympic movement.

I know first hand the sacrifice and struggle so many athletes have made to get to the Games; how every individual pushes to their maximum potential. I see how uniting for a common goal is a catalyst that propels individuals to do more than would for themselves.

Countries present their best and their people rise in pride and support. I see how for two weeks, the world, does, in fact, come together and it’s a better place. It’s inspiring. It brings out the best in all those who become swept up in it.

Even commercials encouraged us as they pointed to the ingenuity that began as thoughts in garages, how American bootstraps and hard work pay off, how falling over and over eventually accomplishes something significant if we don’t give up and another asked the Walt Whitman question, “What will your verse be?”

It fueled me to pick up steam on accomplishing something significant and my resolve to give my kids all they need to chase their dreams.

They grew up in neighborhoods just like yours. The difference is they simply had parents who gave them what they needed to maximize their potential…at home.

Every child has potential. Yours. Mine. The kid across the way. Everyone’s. They may be athletes or artists, intellects, nurturers or leaders.

It’s our role as parents to help them achieve something important. Not just to become an Olympian or a rock star just to be a rock star, but to discover who they are and magnify it…into more.

All it takes is a little Visioneering. Starting at home; see your child’s potential. And with some basic engineering, help them maximize it.

For more on the Visioneering formula, check back next week.

Diane Runge writes about helping children find their physical, mental, spiritual and emotional balance. The mother of three gifted athletes; a son who played baseball for Bucknell University, a daughter who swims for the  University of California – Berkeley swim team while she trains for the Summer Olympics in 2016, and a daughter training for the United States Swimming Jr. National Championship this Spring, Diane Runge believes every child has potential that can and ought to be maximized.  A 1979 graduate of Coatesville High School, Runge earned a Master’s degree in Education from Elizabethtown University.  Her Sportsmomia blog is read by parents around the world. Runge and her husband Scott reside in West Fallowfield.